I'm still working through the backlog of project information.  It's the second day of posting one update per day, and I think I might have enough stuff to keep this up for two or three weeks.

After creating an intial design and schematic of the low voltage warning device, the next task was to make a prototype.  The very first prototype, made to verify that the circuit actually worked, was on a breadboard.  After that, I decided to make a couple more permanent prototypes to use in testing the concept.

I wanted to use stripboard for the prototypes.  I bought some stripboard a few years ago, but this was the first time that I actually tried using them for anything.

I discovered that creating a layout for stripboard is more complex than I had expected.  I suppose it would be very easy to simply transfer a breadboard layout to the stripboard, but that would not be very space efficient.  I tried a couple of different stripboard layout programs, and ended up using the free version of VeeCAD.  It's far from perfect, but it gets the job done.  I liked the fact that component footprints are very easy to add.

One feature that I'd really like to see is an option to highlight all traces and wires that are electrically connected.  After doing a layout, I ended up saving a picture of the design and using GIMP to trace over it in various colors to verify that all components were connected correctly.  It would be easier to have this done automatically by the stripboard designer application.

This is what the stripboard design looked like (colored version): 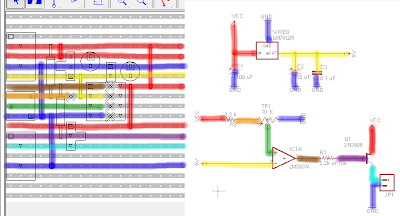 Here is the first board that I made: 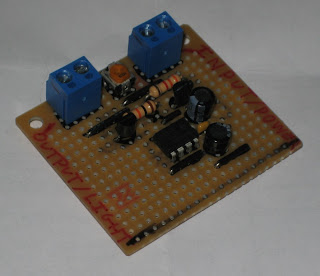 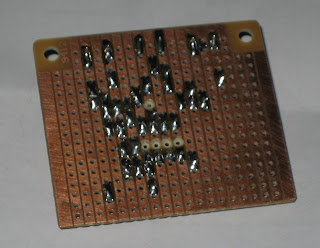 This board worked fine, and would have been suitable for a permanent installation, but it was not all that convenient to test with.  So I made another prototype, with a few changes.  The third prototype was build into a re-purposed case from a cigarette lighter power supply, and had a built-in flashing LED.  I also added a diode to protect the circuit from reverse polarity, and re-did the stripboard layout to cram it into a smaller space.  Here's the third prototype: 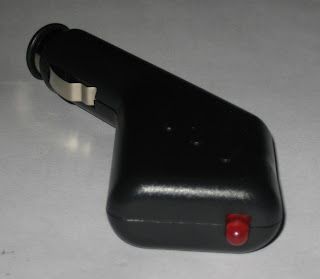 This version was used to do some real-world testing of the concept.  These were the observations:

This is suddenly getting a lot more complicated!  Maybe I can now justify using a microcontroller.

Here are some observations of my own about the design:
I don't especially enjoy having to take all of these things into consideration.  It's much more fun to just build prototypes and never worry about the robustness of the design!
Posted by Unknown at 1:40 AM