The most recent design idea for the low voltage warning device will require a dual color indicator LED.  One of the colors should be green to indicate the "OK" state, and the other should be orange, yellow, or maybe red for the error condition.

I went to Digikey and looked through the available LEDs.  I found 5 differerent ones that may work, and ordered a couple of each: 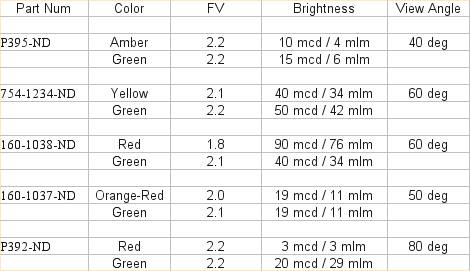 (I apologize for using a screen shot of a spreadsheet here, but I don't feel like messing around with table formatting right now.)

After receiving the Digikey order, I put the LEDs on a breadboard side by side to compare them.  There are two of each LED, one green and one other color.  Here is what they look like: 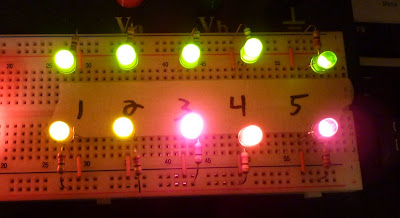 LEDs from the front in dim light. 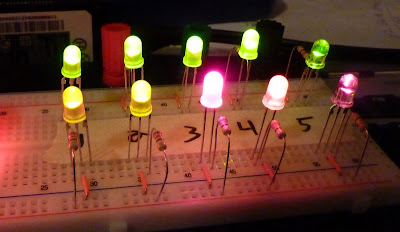 LEDs from the side in dim light. 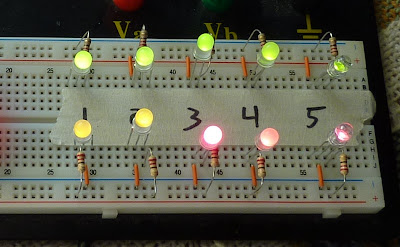 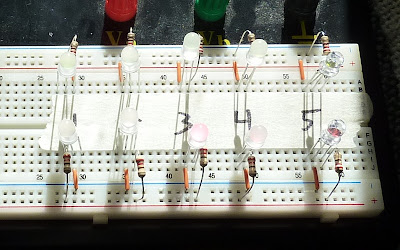 My observations about the LEDs:

If I want the indicator LED to be visible in direct sunlight, I'm probably going to need a brighter LED.  I didn't want too bright a LED because it should not be blinding if used in the dark, but maybe that's not much of a concern since the LVW device is now slated to have a dimming function.

There is one LED from Digikey that looks like a good candidate; I wish I had included one in the order.  Digikey P/N 754-1235-ND has specifications similar to the #3 LED, except that the red component is twice as bright.  It's also a bit cheaper.
Posted by Unknown at 1:59 AM