I've been getting a little frustrated with the 3D printer.  The past couple days, it has continually been failing to get through a printed object.  It starts out well, but after a few layers the extruder starts slipping on the filament.  It digs a nice little notch in the side of the filament instead of extruding it.

I tried extruding hotter and colder, tried with the idler wheel tighter and with it looser.  I even tried taking the insulation off of the heater barrel in case the filament was melting too far up into the barrel.  Some changes made it work worse, but none made it work better.  I've been seeing a lot of this: 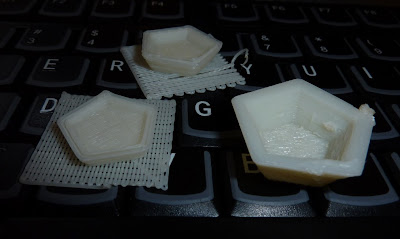 These are supposed to be dodecahedrons.

I did finally figure out the problem late tonight.  I completely disassembled the extruder barrel assembly.  It turns out that the PTFE thermal barrier was too tight towards the bottom, and greatly restricting movement of the filament.  I cleaned it out using a 1/8" drill bit (held by hand, not in a drill) until the filament could move through it with no resistance.  I had to remove some more material from the inside of the thermal barrier after screwing it back in to the heater barrel.  Now it works quite a bit better: 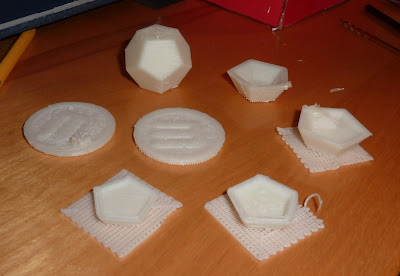 See that in the back?  It's a complete dodecahedron!  Here's a closeup: 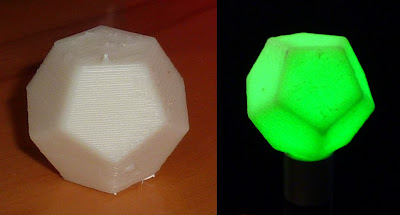 The one on the right is sitting on top of a green laser pointer.  It glows nicely.

It was exciting to see this part completed.  I was surprised at how well bridging the top material over the hollow inside of the shape worked.

I just realized that I don't have any pictures of the completed 3D printer up here yet, so here are a couple.  The wire routing still needs some work! 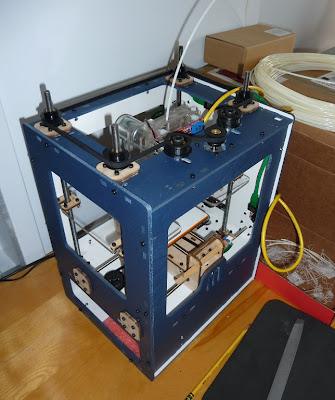 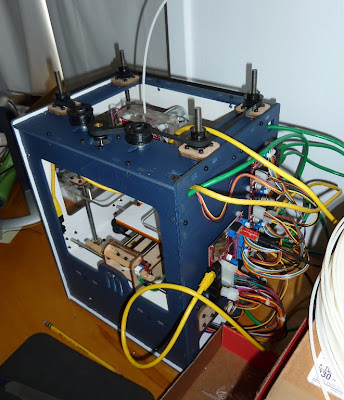 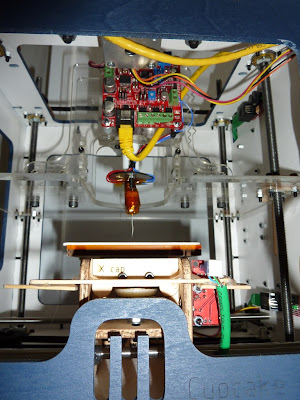 I like your paint job. Mine is very similar. Krylon Navy blue outside and Krylon Gray inside. I will get some pictures up when I get a chance.
As for the extruder I have had similar problems. I ran into the following problem. If I leave the filament in and let everything cool down it would not extrude when I start it back up. The gearmotor just scooped out a peace of the filament and spun in place. I was able to midigate the problem by heating to 220, reversing the filiment for a few secs, waiting about 30 sec, and then driving it forward. Eventually I took the whole thing apart and made adjustments according to http://blog.reprap.org/2009/09/my-extruder-doesnt-work-what-can-i-do.html

It is currently working pretty well but I am still reversing the filament for the first build of the day. I did notice that there was some resistance pushing the filament through the PTFE barrel. Eventually I will try and boar it out with a drill bit the way you did. Maybe that will solve my little problem.

That first successful/semi-successful build is quite exciting. For mine I had to tape down the raft on a 606 pulley

Good luck with the extruder,