I spent another 10 or 11 hours working on assembling the CupCake CNC Kit today.  I've made some progress, but it's not done yet. 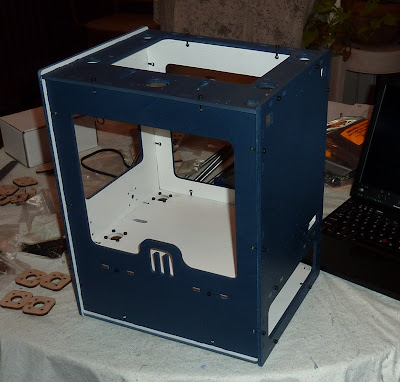 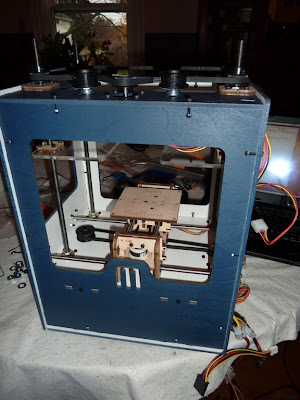 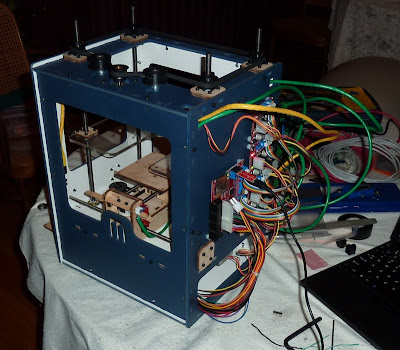 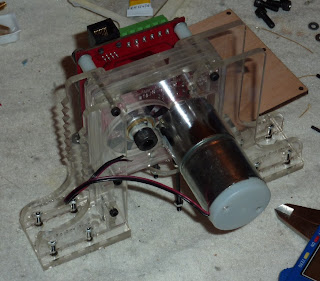 Even though I don't have the extruder done yet, I tried running the 3 axes once I got the electronics installed.  It actually moves!  I did discover that 1 of the 6 end stops does not work.  I haven't figured out why yet.  The X and Y axes are louder than I expected; I'm not sure if I'd want this sitting on my desk printing away while I was trying to work on something else.

I continue to be impressed with the design of this kit, with the exception of the end stop triggers.  The end stop triggers are popsicle sticks hot glued in place.  The slots which hold the sticks and the optical end stops don't even all line up well, so the popsicle sticks end up angled or offset.  It looks quite messy, especially compared to the quality of the rest of the machine.

There have been a couple times while assembling this that I get something put together,  only to take it apart again a few minutes later when I realize that it could be aligned better.  This isn't really a fault of the instructions; it's more that I don't realize the entire function of each part until I see it all together.

Hopefully tomorrow I'll get the extruder finished.  Maybe I'll take a look at the non-functional end stop as well, and see if I can figure out what's wrong.
Posted by Unknown at 12:52 AM